Audio: Vanity case and photographs belonging to Longford woman Kitty Kiernan expected to fetch in excess of €5,000 at auction 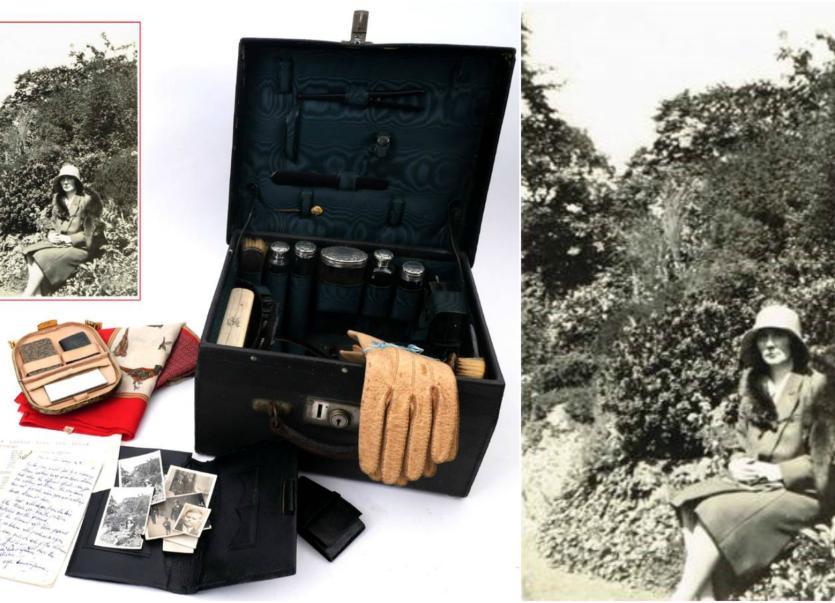 A vanity case belonging to Granard woman, Kitty Kiernan, who was the fiancée of Irish revolutionary leader and politician Michael Collins, is to go under the hammer on Saturday, May 5.

Speaking on The Ray D’Arcy Show on RTÉ One television on Saturday night, Ian Whyte, of Whyte’s auction house, Molesworth Street, Dublin, revealed that it is the first time he has seen anything, directly relating to the famous Longford woman, come up for auction.

The vanity case, with green watered silk interior and silver mounted cosmetics jars and accessories, is part of the Whyte’s auction house May 5 ‘Eclectic Collector Sale’ and Lot 117 also includes a pair of gloves, a headscarf and some notes, as well as eight small black and white photographs of Kitty Kiernan and her two boys.

Mr Whyte explained that provenance goes directly back to Kitty Kiernan, with the items originating from Lorrha, Co Tipperary and the home of Michael Cronin, a nephew of Felix Cronin (Kitty Kiernan's husband). They were subsequently purchased by a collector from Cloghan in Co Offaly.

Mr Whyte said Kitty Kiernan’s vanity case and all other lots in the ‘Eclectic Collector Sale’ will be on display at Molesworth Street from May 2 to 4.

He pointed out that it was ‘difficult to put a price on something so unique’ but it is expected the lot could fetch between €3,000 and €6,000.

Catherine Brigid ‘Kitty’ Kiernan came from a quite well-off commercial family from Granard. They owned and ran several businesses around Longford town, the Greville Arms Hotel, a grocery shop, a hardware store, a timber business, an undertakers and a bar.

Kitty is, of course, best remembered for being the fiancée of Michael Collins and the photographs include two copies of her sitting on the roadside at Beal na mBlath the year after Collins’ death.

They are inscribed in pencil on the back in her looping handwriting, “Roadside - Beal na mBlath – Co. Cork Aug 1923”.

In 1925, she married Felix Cronin, Quartermaster General in the Irish Army. They had two sons, Felix Cronin and Michael Collins Cronin

Conor Dodd, historian at Glasnevin cemetery where Kitty Kiernan was laid to rest, told Ray D’Arcy that Michael Collins proposed to Kitty on October 8, 1921 in the Grand Hotel in Greystones and she accepted.

They never got to marry as on August 22, 1922, during the Civil War, Michael Collins was assassinated by Anti-Treaty, Irregular forces at Béal na mBláth, County Cork. She later married Felix Cronin in 1925. Julia Roberts famously played Kitty in the film Michael Collins.